Andraste is a goddess worshipped in Britain by the Celtic tribe of the Iceni, led by Queen Boudicca. She may be a goddess of war, as she was called on for victory in battle.

Cult
All we know of Andraste’s worship comes from Dio Cassius, who tells how Boudicca called on her for victory in an upcoming battle, releasing a hare and interpreting its path as a form of divination. It is uncertain whether the hare is in fact Andraste’s animal or whether it was simply the means of the augury. He states also that she was worshipped in a grove, and that her worship included sacrifices and feasts.

Etymology
While Dio Cassius identified “Andraste” as the Gaulish version of the Roman Victoria this does not tell us the derivation of her name, she also been connected with the goddess Andarta but this too is uncertain.

Tribal and other associations
Andraste was a goddess of Boudicca’s Iceni tribe in eastern Britain.

Region
As a goddess of the Iceni, Andraste is known to have been worshipped in eastern Britain, in what is now Norfolk, England.

Literary evidence
The Roman historian Dio Cassius tells us that Andraste was called on by British Queen Boudicca of the Iceni tribe. 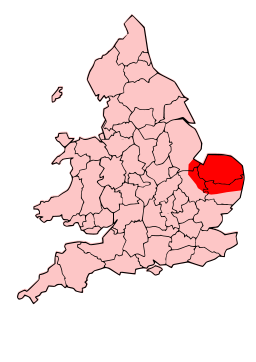 Map of the Iceni territory via Wikimedia Commons